Well done, everyone who came to the rally! It was a great day out, and a fantastic inspiration to be with hundreds of folk from all over Manchester at the iconic Albert Square, standing where so many people have stood down through history for their various causes.
The event refuelled us with yet more feisty determination, to Say No to the Concreting of Mottram and Hattersley’s Playing Field; to stand with our fellow campaigners from Stalybridge and Godley Green; and to link up more with Greater Manchester Community Groups and beyond – to Expert Groups campaigning at National Government level.
Thanks too to everyone who has helped produce posters, distribute leaflets, website work and lots more, and to the Save Manchester Greenbelt Group for organising the event! 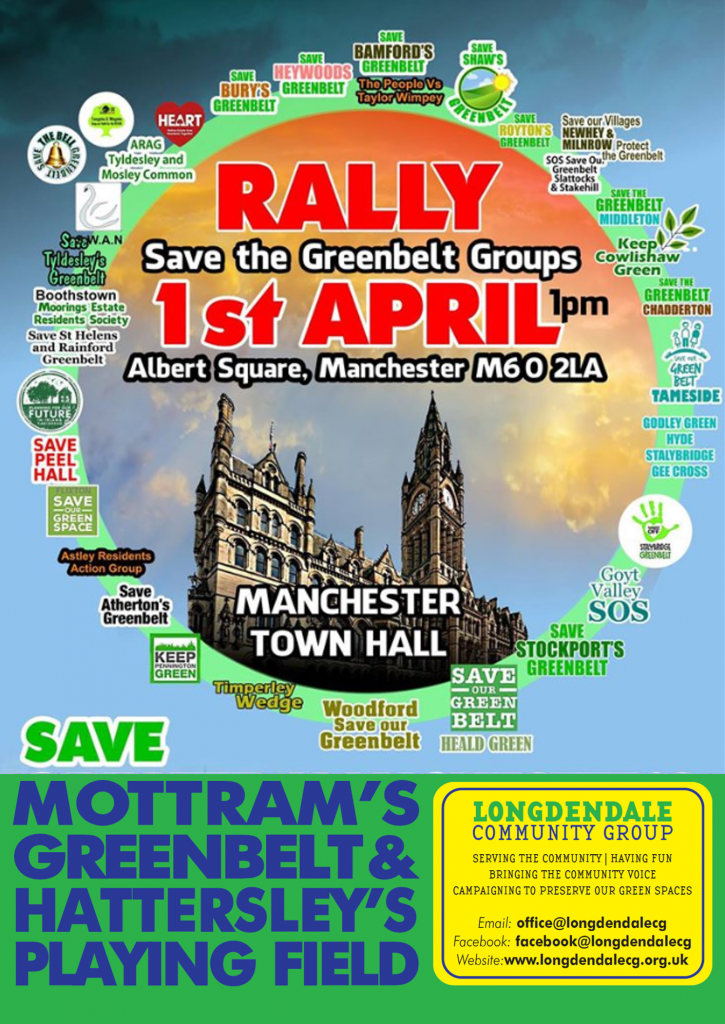 Why was this rally on April fool’s Day? Because we recognize that Powerhouse money-grabbing, developer-led Council Plans DO NOT FOOL US

Well done everyone who has objected to the GMSF

and to those who turned out to the protest march in gruelling weather conditions. Many of you walked the whole way to the far end of Gee Cross! 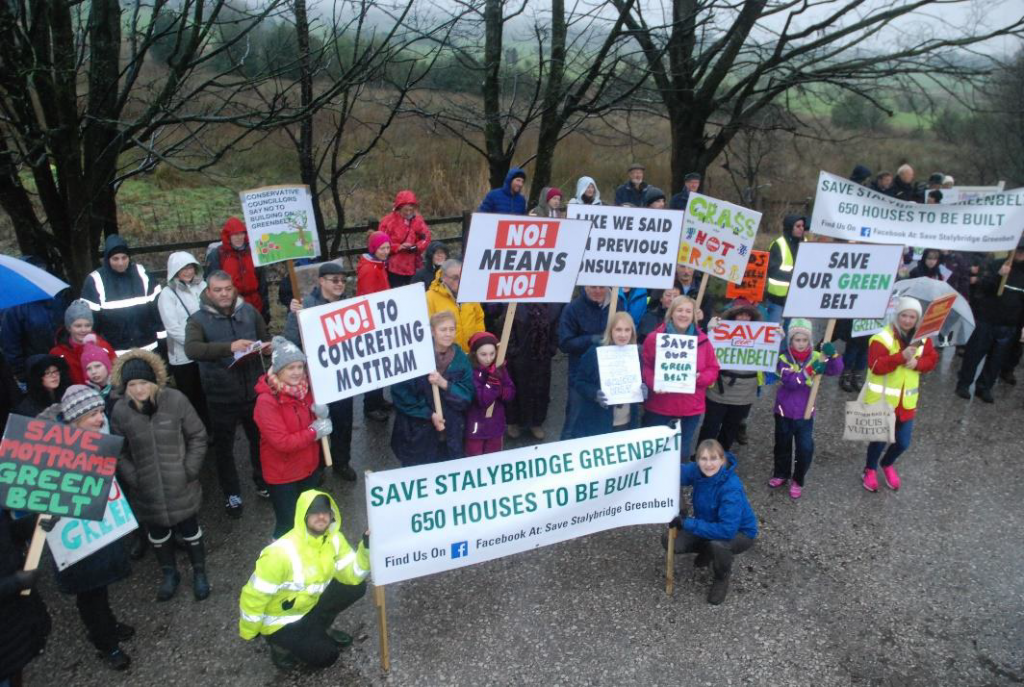 Here are Shirley and Katherine, from our core team. 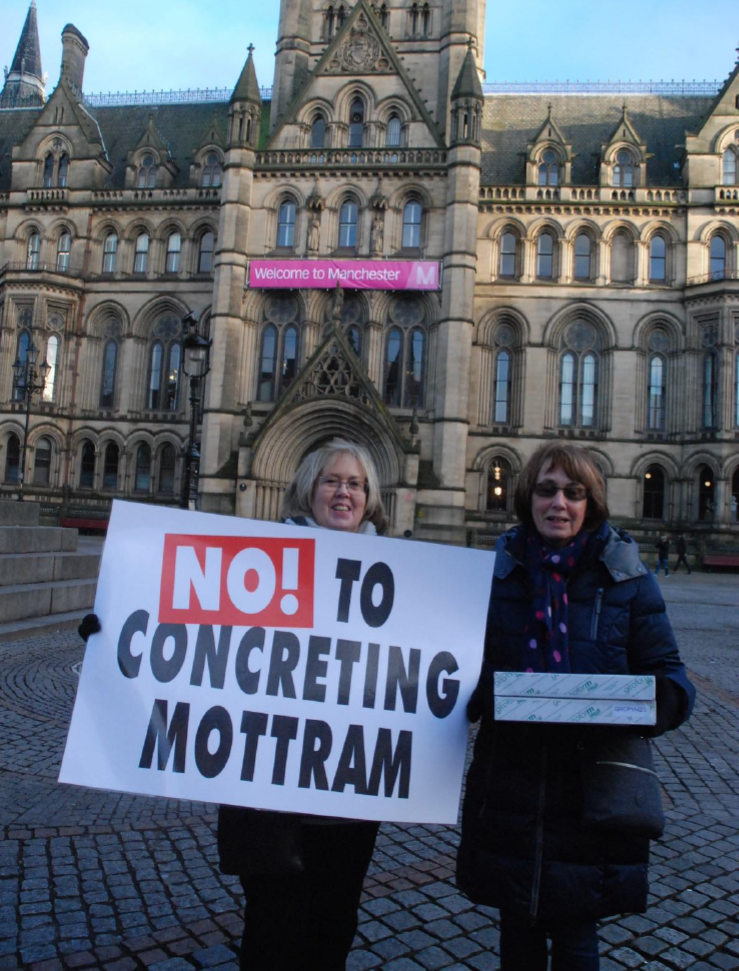 which we submitted to them! In this, we gave 32 reasons for objecting to the GMSF plans for Mottram, and 10 reasons to reject the GMSF plan as a whole.

We also sent them photographs such as these, to help get our message across……. 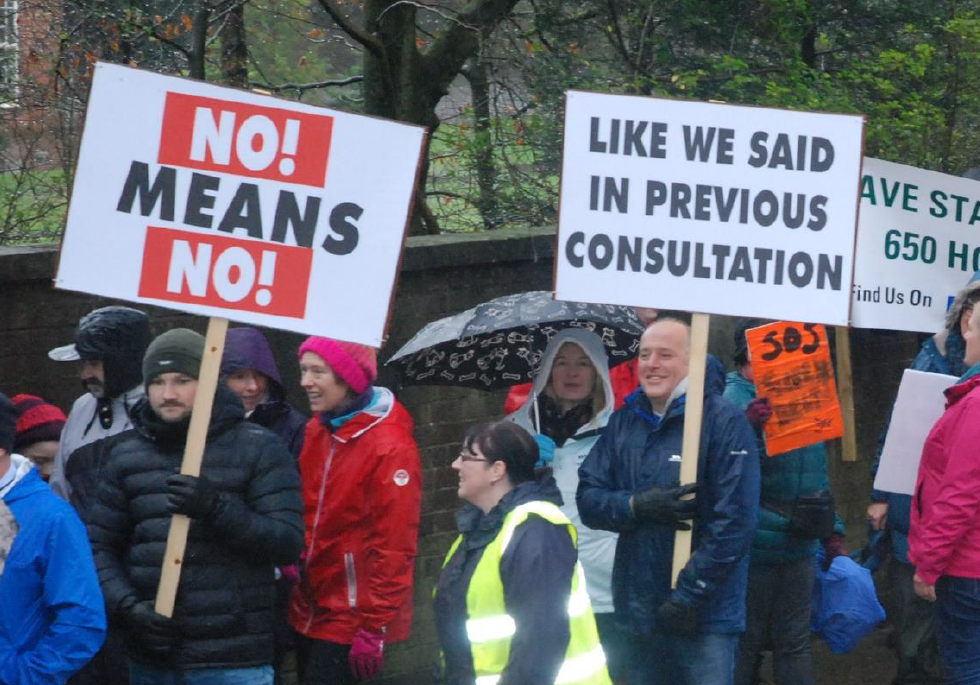 Lots more is happening and we must keep up our momentum. We need more folk to help, so please volunteer – just contact us at office@longdendalecg.org.uk
Especially keep 1st April free in your diaries for a mass protest at Manchester town hall. Given the date, your posters could be interesting!

For our story of the campaign and more images click here.

Big plans we nicknamed  “concreting Mottram” were part of a huge set of plans for the whole of Greater Manchester, called the “Greater Manchester Spatial Framework” (GMSF). The planners  invited your response to the plans, even though the plans were almost identical to the ones of 5 years ago!  In addition, there were further  plans for areas nearby:

Godley Green is rural land, just down Stockport Road and south of Hattersley station. This area is as big as the whole of Hattersley West of Stockport Rd, and its new commuters from there will massively add to traffic chaos at the M 67 junction. Worse still, Tescos, plus the district centre & planned new supermarket  will suddenly become more central to supply this big urban sprawl.

Our huge community response of over 500 objections to concreting Mottram are being sidelined and ignored. We think this is diabolical, and a reason in its own right for objecting. Your previous responses (if you made one) during the “Concreting Mottram” campaign needs to be re-submitted if your view is to be considered.

If we don’t object strongly as a community, this will give the message to the planners and developers that we don’t care – and this is a green light to development. Already there have been big protests in other areas (e.g. Rochdale). We do need to find our voice again. Remember we did a great job last time, and produced a massive community response

General Objections to the GM Spatial Framework in its entirety
What’s on the plans for Longdendale and Godley Green?

What the press are saying about the plans across Manchester? 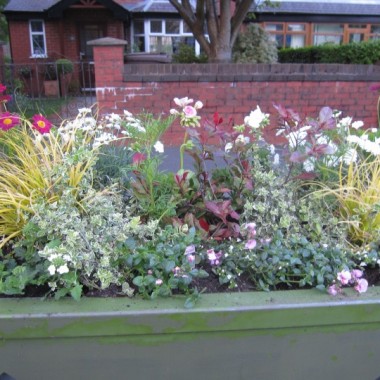 Thanks to our social team and residents on Stalybridge Road for adopting the flower troughs, which TMBC are no longer maintaining. The team have planted gorgeous flowers, which looked stunning through the summer to late autumn!

Kathryn, from our social team, writes:
A small group of volunteers wanted to brighten Mottram and raise community spirit. Our fund-raising Spring Afternoon Tea enabled us to raise £150 to benefit our area. In June we used some of this profit to supplement Tameside Council's District Assembly fund to purchase plants and for enhancing Stalybridge Road metal and wooden planters.
A group member's husband Allen, offered his expertise, time and labour to our small team, who weeded and planted the tubs.

Several residents, living close to these planters, agreed to support our efforts by tending and watering the plants regularly. This gave the village a warm glow over the summer months and well into autumn.

Thanks to our growing band of volunteers and all those supporting our successful community project. 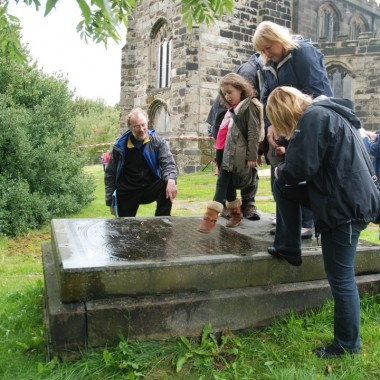 Eight teams from a wide age range valiantly set off on the Longdendale Community Group's Mottram Treasure Hunt on Saturday, 12th September. As the teams braved persistent rain and teddy bears parachuting from the parish church tower they searched for the answers to the 50 clues dotted around the village. The teams were genuinely enjoying the event as they discovered hidden corners and historical or curious facts relating to this special village.

With 6 teams scoring highly and the top 2 teams gaining full marks, the winners were decided by the tie break question, 'In cm what is the height of the village Christmas tree?' And so it was that in a nail biting finale 'The Goomers' won by 2 cm. Many congratulations to them and well done to all who took part. As the sun finally broke through with late afternoon sunshine we retreated to the Mottram Cricket Club function room for a cricket tea and the prize giving ceremony. We would like to thank the cricket club for the use of their premises, our wonderful caterers who did a magnificent job and the people who had donated the prizes.
To see where we hunted for clues around Mottram, click here. 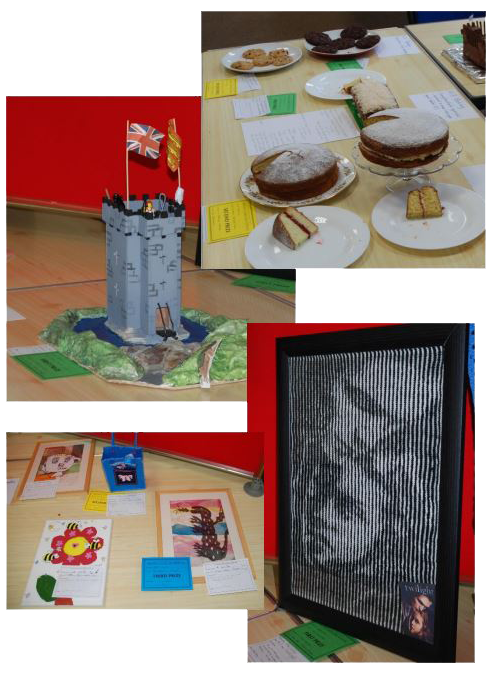 At our summer festival, lots of competition categories made for a really colourful and entertaining event, and lovely refreshments were provided. Many exhibits were so fantastic that they amazed the judges! Gold, silver and bronze medals were awarded for first, second and third places in art, needlecraft, models, history, poetry and baking. 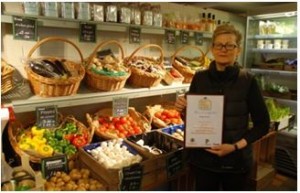 There were hundreds of entries. The twenty shortlisted shop owners were invited to a reception at the House of Commons. Congratulations to Kim, Rod and their staff!

Kim (pictured on right) proprietor of Village Greens, with her Shop Award!

“Absolutely amazing shop. The presentation is beautiful, the food fresh, but best of all the staff are attentive and so helpful!”

“Where else would you get a warm cup of roasted butternet soup to sample whilst doing your shopping?” 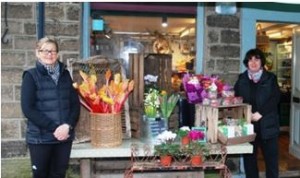 RESULTS OF OUR SURVEY

Our consultation was posted through letterboxes and distributed to local shops.

Of 300 responses, not one person wanted this development! Read more…

The onward march of the developers looms over us more than ever.

Ominously, it appears that this corridor from the proposed district centre site through to Roe Cross is an expansion of the Concreting of Mottram plan. The by-pass is linked with allowing industrial and big retail development, plus more housing, all along the Longdendale corridor

Up-to-date plans for the Mottram by-pass do not appear to have been published, and are probably in preparation (if you find anything, let us know!). From what has been announced so far, the plans seem to roughly correspond to the old Mottram Spur (of the Longdendale by-pass) on its own. This can be seen on the LITS scheme (ie the Longdendale Integrated Transport Scheme ) map, shown in part below. The Spur is indicated with red arrows.